Wine touring in the Cape winelands of South Africa

Over the last 20 years I’ve heard wine agents and importers, whose global expertise ranges from Burgundy to Barossa, Ribera del Duero to Russian River, mention that the Cape is the most stupendously glorious wine region of them all.. The sheer natural beauty is mind-boggling, with a mountainous backdrop reminiscent of the Alps and a coastline echoing the Riviera. Not only is the environment hypnotising, but the substance of the 900 or so wine producers scattering the Cape is truly inspiring. From past-monopolising giants like the KWV (founded in 1919, the largest cooperative and producer in SA), to small boutique set ups such as De Trafford tucked away in the armpit of the Helderberg mountains, there is something for everyone in this vast and varied regional sprawl, including families whose small children are not of legal age to consume alcohol (and are bored by the idea of walking around a wine farm). Trust me, there’s lots to do..

Simply put, when visiting Cape Town and the Cape, it would be foolish not to include one or more of the wine regions of Constantia, Stellenbosch, Franschhoek, Paarl or Hemel an Aarde, to mention a few.. 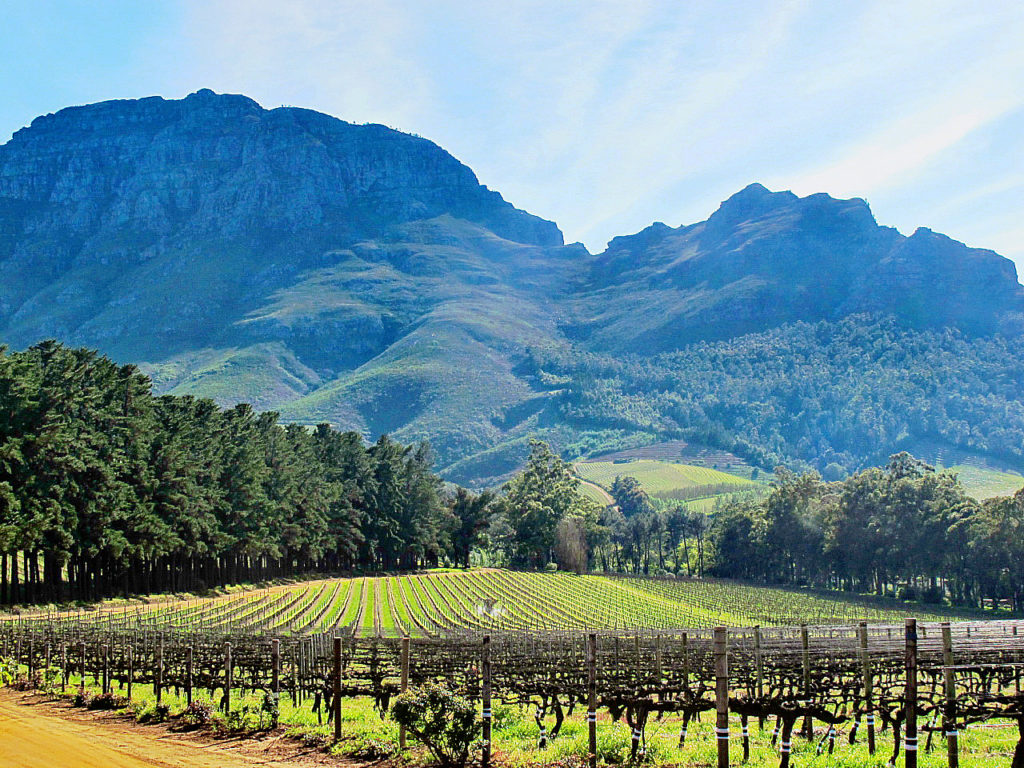 Which farms to include?

Well, if you’re in Cape Town and without transport then the easiest of options by far is to simply jump on the hop-on hop-off bus – this double decker audio guided transport is fabulous for visiting both the historic soul of the Cape wine industry (namely Constantia) as well as the picturesque regions of Stellenbosch (the heart-beat of the industry) and Franschhoek (sometimes referred to as the gastronomic stomach.. although that could arguably be pinned on Stellenbosch). If you want to get under the skin of this fascinating fabric delve into one of the couple of hundred historic farms such *Groot Constantia Est.1685 (made famous by the godfather of Cape wine (Simon van der Stel), Klein Constantia (producing one of the most revered sweet wines in the world: Vin de Constance), or *Buitenverwachting to name a few in Constantia, the oldest wine region, only a stone’s throw from Cape Town. Venturing out into the Stellenbosch winelands (40 minute drive from Cape Town) might lead you to Meerlust, *Morgenster, *Vergelegen, *Rust en Vrede, Rustenberg, and many more.. In Franschhoek you may want to include *Boschendal, Allee Bleue, Anthonij Rupert (L’Ormarins) or La Motte.. All the afore-mentioned farms harbour 300 years or more of winemaking history. To flip the coin onto a contemporary side, look at visiting *Hidden Valley, Ernie Els, Uva Mira, Waterford, *Delaire Graff, *Tokara and *Glenelly in the Stellenbosch region and Cape Chamonix, Mullineux & Leeu, Colmant, *Babylonstoren, *Holden Manz or *Le Lude – all charmingly picturesque, often housing their own boutique *restaurants and usually ticking boxes of things to amuse children (namely Boschendal’s picnics and cafe style restaurant as well as their more up-market De Werf Rest.,). Located between Franschhoek and Paarl, Fairview (cheesery, goat tower, bakery and tasting centre) and Spice Route (chocolatier, CBC brewery, arts and crafts, coffee roastery, distillery, cured meats boutique and plenty of space to run around..) are huge draw cards for families in particular. If touring on a weekend, Blaauwklippen in Stellenbosch, Lourensford in Somerset West and Root 44 / Audacia between the two are a merry go round of family adventures including mini golf, jungle gyms, crafts and live music.. 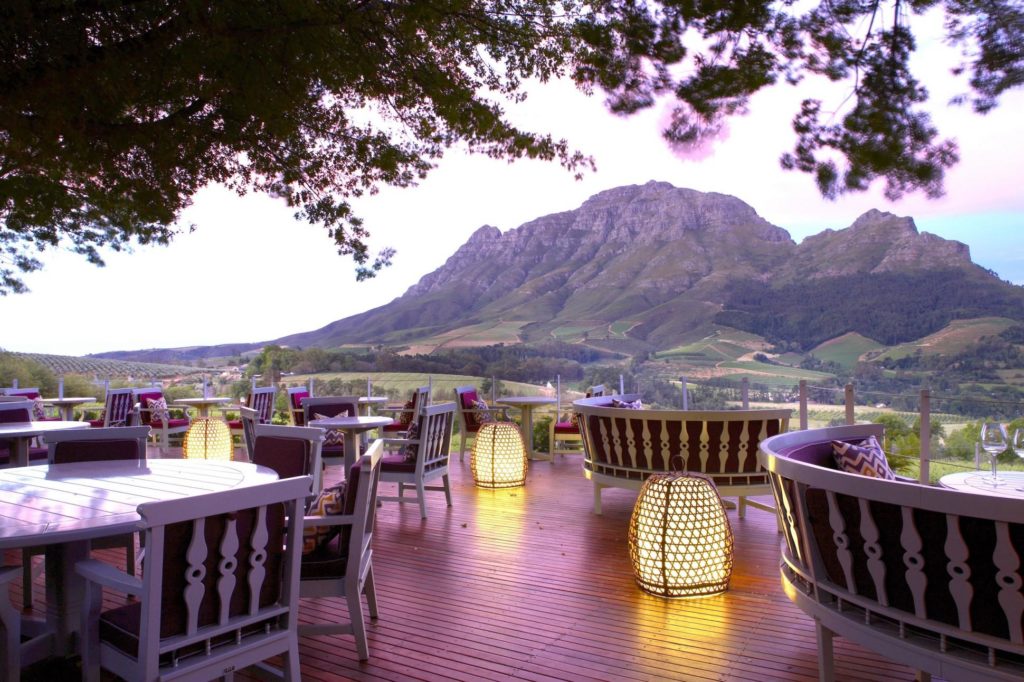 How much time should one allocate to touring the winelands?

3 days / 2 nights – minimum!.. Whether you’re honeymooners, couples, families or city-dwellers, I’ve heard time and again many tourists mention they wished they’d stayed longer.. It’s brimming with lots to see, do, explore and enjoy.. The historic towns or Stellenbosch, Franschhoek, Paarl, Wellington, Tulbagh and Riebeek alone (all suitably picturesque) adorned by their magical landscapes – bulging with historic buildings and museums such as The Rupert Museum (South African Art), Blettemenhuis, Olof Bergh Huis, Schreuder Huis, The Kruithuis, Grosvenor House all under Stellenbosch Museums. In Franschhoek there’s the Huguenot Museum through which many a South African trace there ancestral roots.. There are nature reserves in which to hike and cycle: Helderberg Nature Reserve (hike) and Jonkershoek Reserve (cycle). There are micro-breweries at Triggerfish, The Spice Route Cape Brewing Company (CBC) and Darling Brew to name only 3 out of over 150 in the western Cape. Restaurants galore.. on a quality scale that are not only world class, but whip the ‘asses’ of most european and american restaurants on price alone, leaving you standing in awe.. In no particular order, some of these are Overture, Delaire Graff, Tokara, Rust en Vrede, The Camphors at Vergelegen, Waterkloof, Idiom, 96 Winery Road, Longridge, La Petite Colombe, De Werf at Boschendal, The Vine Bristro at Glenelly, Makaron at Majeka, Terroir, Jordan, 95 On Morgenster, Guardian Peak, Pierneef at La Motte, Maison, Grande Provence, Foliage, Marigold, The Grande Roche… 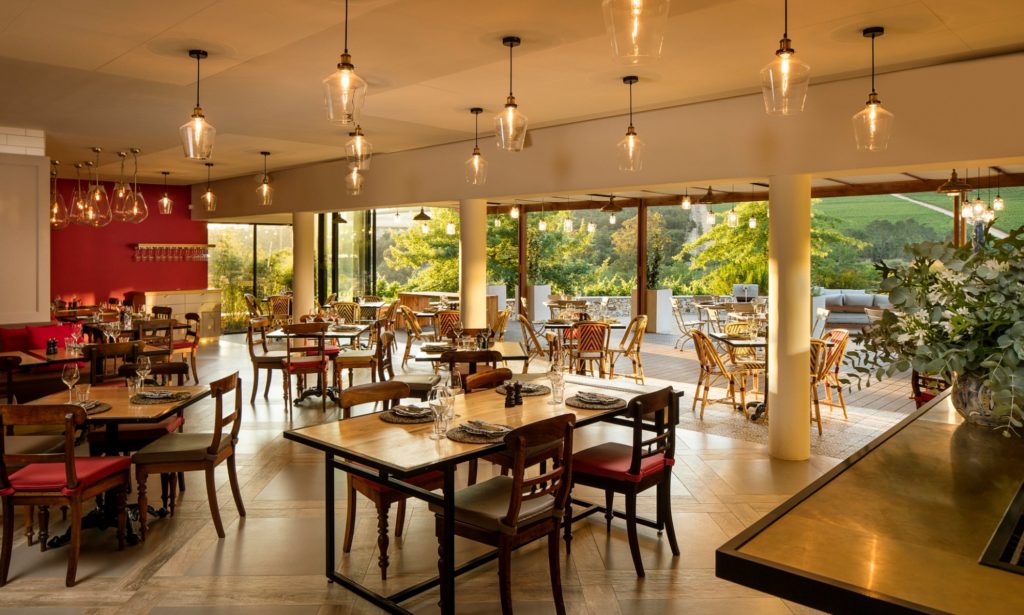 Richard is the Founding MD of Greatest Africa & Richard Hilton Vineyards. He lives in Somerset West with his wife and two daughters. He is passionate about the Cape, travel, global wines, wine education and sharing his experiences of this beautiful country that he calls home.