The beautiful Maldives, often referred to as the Maldive Islands, is a picturesque Island Nation in the Indian Ocean – Arabian Sea region. This idyllic stretch of picture perfect islands about 600 kilometres (370 mi) south-west of India and 750 kilometres (470 mi) south-west of Sri-Lanka. The Maldives is not only a serene tropical island destination, but rich in culture and history, with a colorful past. Before the 12th century BC, Buddhism was widely practiced, with ancient architecture reflecting this peaceful culture. With trade routes Islamic culture followed, and was adopted by most throughout the Island nation. Under British Protectorate from 1887–1965, the Maldives is now an independent Nation, with a bustling tourism industry. Comprised of 1,192 coral islands grouped in a double chain of 26 atolls, the Maldives is spread over approximately 90,000 square kilometres (35,000 sq mi), making it one of the world’s most dispersed countries.
A rich and thriving marine ecosystem, the Maldives has 31 protected areas, administrated by the Ministry of Environment and Energy and The Environmental Protection Agency (EPA) of the Maldives. Maldivian waters are home to a wide variety of ecosystems, the most notable is the vast selection of colourful coral reefs, which sustain over 1100 species of fish, 5 species of sea turtles, 21 species of whales and dolphins, 187 species of corals, 400 species of molluscs, and 83 species of echinoderms, 120 copepod, 15 amphipod as well as over 145 crab and 48 shrimp species. A divers delight, the Maldives with its warm tropical climate is a favourite destination for romantics, honeymooners, and ocean lovers. 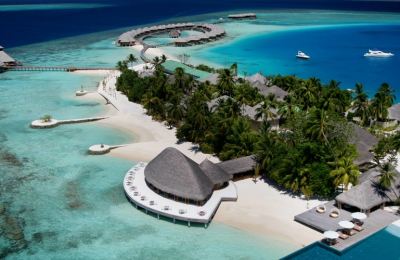