I don’t think anyone ever forgets the first time they see an African elephant. Is it the sheer size of them, or the way they move, their enormous strength or simply how quiet they can be that makes them one of the most riveting animals on earth to watch in the wild?

I was taking a band of happy tourists through the Moremi Game Reserve in Botswana a few years back. We had been warned to keep an eye out for a particularly large elephant in musth; a time when reproductive hormones in male elephants rise and can cause them to become extremely volatile and highly aggressive. We’d had a late afternoon exploring the raw beauty of the savannah, and were about to stop off for a sundowner in one of my favourite spots.

As we slowed down we passed a huge, bull elephant heading in the opposite direction. What appeared to be ‘tears’ streamed from his head. This tar-like substance (called temporin) is secreted from ducts near elephants’ eyes when they’re in musth. This was almost certainly our boy, standing at least 10 feet at the shoulder, and tossing his head from side to side. So we gave him a wide berth! 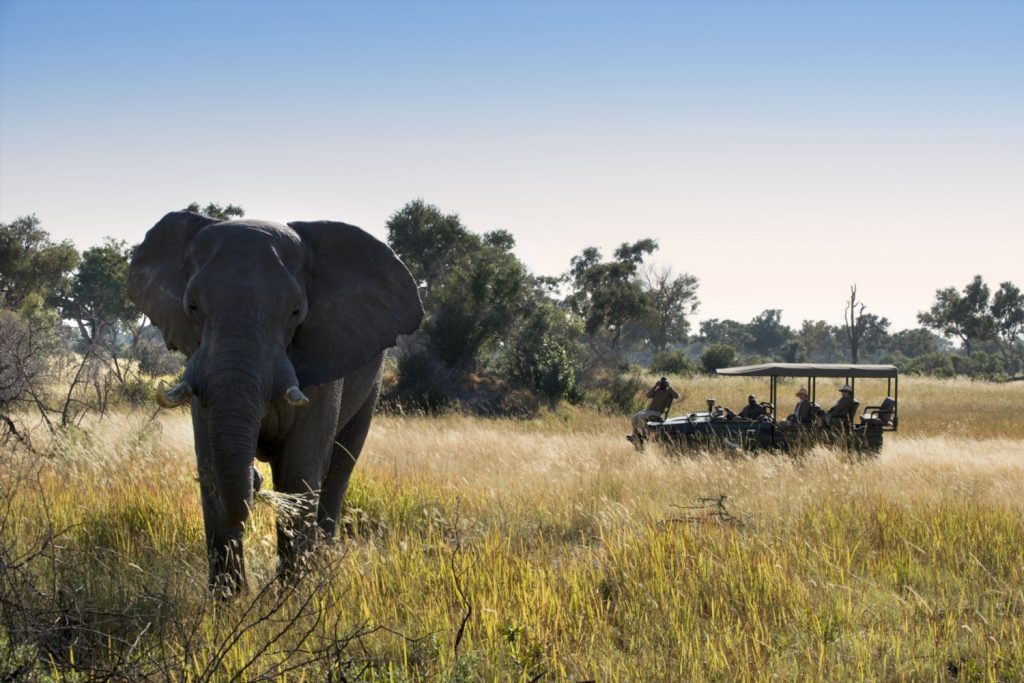 It couldn’t have been more beautiful out that evening. The sun was setting pink and golden over the Okavango and the group were relaxing with a GnT.

A sixth sense made me look up from the little bar area I’d created for myself on the back of the truck. Through the gloaming, I saw the flash of something white. I blinked, but there they were, two of the longest tusks I had ever seen heading straight for us. At that point I couldn’t see the elephant, and even more amazingly, I couldn’t hear him. His patchy dark skin and padded feet had rendered him almost invisible.

I had fortunately set up the guest chairs in a semi-circle with their backs to the trees. Only my guide and I had a view of what was ambling over. It was the same elephant. How is it that something weighing up to seven tons can move as softly as a ballet dancer? I called quietly over to my guests, miming for them to get up very slowly, leave everything in place, and move over to the truck. I remember my tensely whispered words: ‘Whatever you do, don’t look behind you’!

Once we were all safely aboard we were afforded an uninhibited (and safe) view of this magnificent creature, who was almost the same size as the truck. The elephant perused our makeshift cocktail spot and then made his way back to the marula trees, where he was looking to mine sweep some of the fallen fruit. Unfortunately, one of my group hadn’t headed my warning of ‘no flash photography’ and snapped a picture just as our visitor was leaving.

There are very few times in life where you feel your heart actually stop beating and this was most certainly one of them. Was our elephant going to let this rude interruption to his evening stroll go? It turned out he was not… and his ears began to flap and he let out a deep rumble. For those who have been on the other end of an elephant charge, one doesn’t quite know the elephant’s intention at the start. So the feeling, no matter the outcome, is abject panic.

Luckily our driver had access to the lights on the side of the vehicle, a bank of seering white halogen lamps for occasions such as this one. As the elephant stormed, he hit the red button! All praise to our disgruntled guest, who managed to pull up the breaks and stop himself from careening into the side of us. I’m quite certain he’d have pushed us right over if he had wanted to. With a toss of his head and another warning grumble, he moved off into the shadows.

My speechless clientele began to process what had just happened and soon their stunned silence turned to relieved laughing. As the time to darkness got shorter, so the tales of the elephant got taller! I can only imagine how they enjoyed telling this adventure story to their friends back home.

To experience the full wonder of the flora and fauna of the Okavango Delta in Botswana, there are a number of reserves and camps you can visit. Inside the Moremi Game Reserve is one of my personal favourites: the Xaranna Okavango Delta Camp. Because there are only nine luxury tents in the camp, you are deep inside and intimately connected to the bush and the wildlife who wander in and around it. Each season is different, but each allows for an up close and personal journey with experienced local guides through the ever-changing landscapes of this miraculous ecosystem.

Robyn Hodson is a freelance travel writer who lives in a small but perfectly formed flat in the art and food mecca of Camberwell, London. She was born in the fairest Cape and spent years taking adventure tours worldwide, most recently safari and camping tours. Her heart will always belong to the bush, the wild animals and the people of Sub-Saharan Africa.